Yesterday we had another ultrasound.  I can’t stop staring at this sweet, beautiful face: 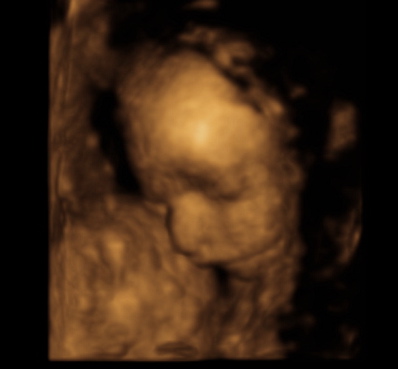 She just looks so peaceful and beautiful to me.  And after yesterday’s ultrasound news, my heart just aches to hold her.

Three weeks ago I had a routine ultrasound.  I get a lot of ultrasounds because of being Type 1 diabetic.  They like to keep a close eye on baby to make sure everything is as it should be.  Three weeks ago they saw an “artifact” on her heart.  The perinatologist said there may be a small hole in her heart.  But he told me to not worry, IF there is one there it is the kind that will close up on its own after she is born.  He also said all the other structures of the heart: the chambers, ventricles, veins, arteries, etc. looked good.  He asked me to come back in three weeks to see if they could get a better look to be more sure of what was going on.

Yesterday was three weeks later.  I really didn’t worry for those three weeks.  I’ve heard of plenty of people who were born with small holes in their heart that closed up soon after birth and caused no harm or need for extra care at all.  And, the doctor said not to worry, so I really didn’t think about it all that much.  Plus, there may not have even been a hole there after all!

Until I was laying down getting the ultrasound.  Then it hit me, “What if there IS a hole?  What if things aren’t all ok today?”  I started getting a little worried, but really not too much.  I tried to pray to calm myself and just remember the words of the doctor three weeks ago, “don’t worry!”

The ultrasound tech did her thing.  She briefly measured everything, we got to see her moving around, squirming, her profile, her hands, her legs, all those lovely little parts!  There is just something SO amazing about being able to see this little being that I feel moving all around inside my belly!  She flipped on the 3-D view for just a few seconds for us and got us the picture above.  She said there’s really no medical reason to use it, it’s just a special little treat we get sometimes.  I LOVE IT!!!  🙂

So, after she did all her things, the perinatologist comes in to look for himself and tell us what he saw.  This peri was different than my regular guy, I had never seen him before.  It took forever for him to come in!!  He reviews all the images the tech took and then comes in.  We waited so long!  Which gave me more time for the anxiety to start building.  I even mentioned to Tim, “do you think the ultrasound tech gave us the 3-D picture because she knows bad news is coming and wanted to give us a treat??” (The tech is not allowed to tell us anything, of course.)

When he was all done he finally gave us the news.

He is 98% sure there is a hole in her heart that could require surgery.  It is on the septum between the ventricles.  It’s called a VSD.  ALSO, it appears that the aorta has grown in the wrong place and has grown over the hole which is very bad.  This would mean that the aorta is getting blood from BOTH chambers of the heart and that is not the way it is supposed to work.  He said this means it would be pumping both oxygenated and non-oxygenated blood to vital organs like the brain.  If this is the case, it will certainly require surgery.  This surgery would have to be done very soon after birth….within a couple months if not sooner.

He said it shouldn’t affect the rest of the pregnancy and that she is fine right now.  Fortunately her body does not get most of it’s oxygen from her blood so this aorta issue won’t be a problem for her until after she’s born.  Unfortunately, he also said there’s nothing I can do about it now.  There’s no diet change or bed rest or anything I can do to affect the outcome.

So, now I go to Children’s Hospital on Monday to see a pediatric cardiologist.  They will also do an ultrasound but have different equipment to see the heart better and will be able to give us more definite information and an idea of what will be needed and what will likely happen after she’s born.  There is a chance, depending on the severity of the issues, that I may need to deliver at Children’s Hospital if there is a need for immediate care.

She’s still MY baby!  I just CANNOT envision myself handing over this tiny, little, fragile baby to be put under anesthesia, cut open and operated on…..on her HEART!  The thought of surgery TERRIFIES me!  The thought of something being bad enough that she is taken from me immediately after birth and I can’t hold her TERRIFIES me!

I know I need to NOT worry about things that haven’t happened yet….I know I need to wait and see what actually happens……I know I need to pray and ask God for strength to get through this and for the miracle of HIS healing of her heart…..but every time I feel her kick (which is obsessive with me now!  Like, if she’s not kicking every moment of the day I’m worrying something happened to her!) it reminds me there is something wrong with my little girl.  And there’s nothing I can do about it!  We thought we lost her once already, I can’t bear that again!

So, here we sit.  Praying.  And, thankfully, there are SO many praying for her!  Waiting for Monday when we should have more information.

6 thoughts on “Ultrasound: full of beauty and pain”

Welcome!
I'm glad you stopped by and hope you enjoy your visit!
A little bit about me and this bloggy thing:
I am a wife, mom and follower of Jesus. I write from the heart, the good and the bad. I don't sugar coat things. I don't see how that really does much good. Life has taken some sharp (and sometimes painful) turns lately, so that is much of what I write about.
I hope you enjoy your visit and would love to hear from you!